A Tribute to Michael Andrews 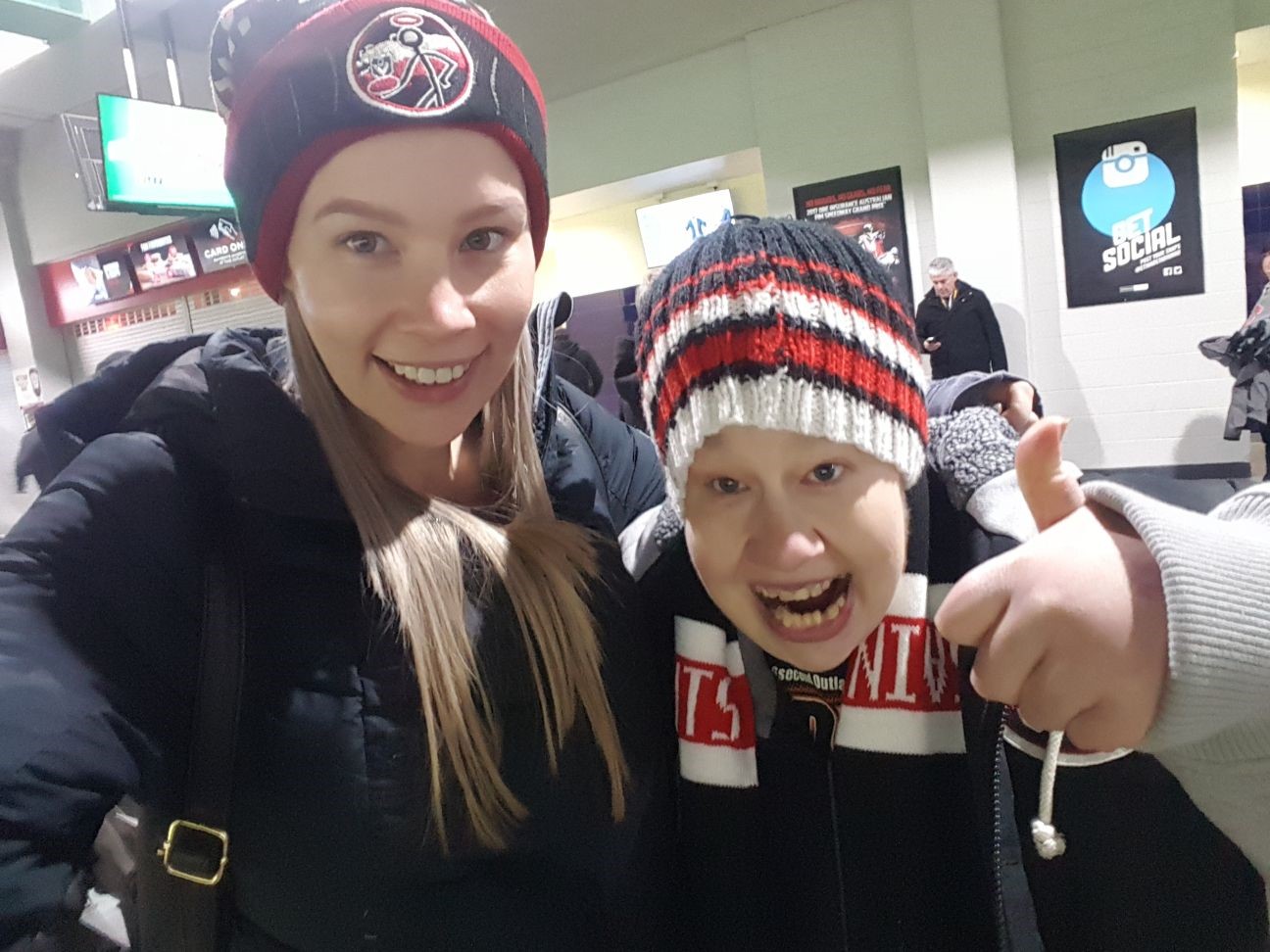 I am very honoured to be invited to share with you all a tribute for my son Michael Andrews.

Michael’s funeral was on Thursday 17th December 2020, thankfully COVID restrictions had been eased somewhat and 60 special family members and friends were able to attend.

It was a week before Christmas when Michael’s celebration of life was conducted and our home was adorned with Christmas decorations and presents under the tree, many for Michael as his sisters always shopped online well in advance, particularly this year with COVID restrictions!

Below is an edited transcript from the lovely celebrant who conducted Michael’s funeral.

Michael Andrews was born on Wednesday 11th January 1984 at the Sandringham hospital to parents Claire and Ron. A planned Caesar, Michael had to be transferred to the Royal Children’s, and after a couple of weeks once he was feeding well he was sent home with his Mum and Dad to Black Rock. It was such an exciting time for everyone, with Michael the first grandchild for Claire’s parents – all his grandparents loved him and enjoyed the time they spent together.

Michael was two months old when he was diagnosed with Prader Willi syndrome – something that had no bearing to Michael himself as he enthusiastically embraced everything in his lifetime with a “why not?” attitude – his words!

Michael was a good baby, with early intervention he was walking by the time his first sibling arrived! Michael’s younger sister Kate was born in 1988 and then Elise in 1990. Michael absolutely adored being a big brother to both the girls. He was also close to all family members, particularly his cousins, who he loved to play with. It was a very busy household in the early years with Michael attending a 3 and 4 year old kinder programme, along with the assistance of an aide. Even from an early age his love of painting and craft was evident and he was lucky to be in environments throughout his years that supported and nurtured his talent for all things artistic! He was such a social young man, loved interacting with everyone and was a whizz at jigsaw puzzles which later flowed through to word searches, crosswords and logic puzzles – he had the patience of a saint when it came to concentrating for a good deal of time on these activities! It was a lovely environment at the kinder which naturally led on to him attending the primary school with his sisters. Along with his integration aide, Michael participated in most activities across the seven years at primary school: he was part of the footy team, he loved art and whether it be music, singing or performing – and he was happiest if he got a solo part! He learnt to read and write, he had a great network of friends, would be invited to parties and his supported him fully. Michael was a friendly happy go lucky person to be around.

Michael moved on to a specialist secondary school in Moorabbin where he remained until eighteen. In these years Michael learnt living skills, good play station skills, he loved arts and craft subjects and swimming. Michael enjoyed so many excursions: horse riding and his all-time favourite, ten pin bowling. From about the age of 14 he would play weekly: Saturday mornings would find him with some of his school friends playing for the Sunshine League at Moorabbin Bowl. He loved it, and was really good too, earning himself some trophies along the way.

Michael was never shy, you might say, attention-seeking and so if the school needed a spokesperson, Michael was your guy!!!

After he finished school he would be collected daily and head to Bailey house where he participated in day programs through the centre. Michael was easy to get organised in the morning: he would be up at 6.00 am and out the front by 7:30 waiting for the bus that wouldn’t arrive until just before 9am! He was always someone who was first to arrive and last to leave – he simply loved being a part of anything. Time for immunisations? Michael was first in line! He was enthusiastic about everything. The family learnt not to tell him about things ahead of time because he would be ready hours or days ahead, eager for the excitement to begin. Birthdays were special, he remembered everyone’s special day (phone numbers and numberplates too!) and loved to celebrate. He enjoyed giving people gifts so Mothers Day and birthdays were always important for Michael. However Christmas was his all-time favourite celebration on the calendar: he had to have the most number of presents (100 $1 presents was preferable to 1 $100 gift!) Michael would be up at 3am on Christmas morning – he loved the extravaganza of the day from the gifts to the food and especially all the family together! They would have large Christmas parties and he loved celebrating along with his younger cousins – there was nothing better.

Michael loved the program at Bailey house for a good sixteen years. The Christmas Concert was a highlight of course. Because he had such a great memory for the words of songs, he always had the starring role for the performance. He also loved the annual cricket match that he participated in against the Elsternwick Cricket Club – I’m sure Michael suffered from FOMO: fear of missing out!

At age 28 Michael decided he wanted his independence and through DHS he moved into Watson Grove – a home that he shared with four other residents. Whilst living there he developed a good level of independence and was happy to have had the experience. And he was always popular with the girls and had a few girlfriends over the years!

Whilst there he experienced a seizure in late 2017 and it was later discovered he had a brain tumour. He underwent radiotherapy – again in true Michael style he embraced the treatment with a positive can-do attitude. He wasn’t fazed with the mask that was made, the treatment, the hair loss, the blood tests – he was there early, excited to go to the appointments, keen as mustard! We have a lot to learn from Michael about attitude!

The last few years have been filled with hospital stays, a leg infection and then the acceptance of a wheelchair after rehab which led to him moving in to Japara nursing home in February this year. Once again, Michael embraced this next stage with a positive attitude and called it “his house” – he loved the other residents and the staff, making this next transition so much easier for everyone. The staff were incredible and supported Michael so well with all the care he required at this stage.

Michael has no fears, he has embraced everything in life and with his strong willed way, even at the end of his life he did it, “his way.”  He had the cheekiest smile, the funniest things to say and a big belly laugh! Staff at Bailey House described Michael as “a one in a million.” Despite his challenges, Michael just wanted to be included, never judging anyone. His face would simply light up when he saw your face – what could be better!

Michael leaves you now, at rest, knowing that he loved and was loved.

Michael’s uncle Brian also spoke at the celebration of life regarding the lighter and funny aspects of Michael’s life.

Michael had a photographic memory for my credit card and often subscriptions to magazines and Readers Digest items would appear on my Mastercard bill to my horror.  He also participated in phone surveys excited by the prospect of winning vouchers.

Michael’s uncle also commented that Michael always believed he could achieve anything he wanted to do, VicKick, swimming, basketball, cricket, nothing was an obstacle to Michael and he joined in enthusiastically!

Michael’s final goodbye was that he was moving on to the next big adventure.

His legacy was that life can deal you a touch deck of cards, but always Michael found the positive in everything, he not only enriched his own life but also the lives of those around him who loved and cared for him.

Michael loved everyone he met; he only saw the positive in everyone.  Michael’s big smile, loud laugh and positive attitude will be remembered by all of us forever

Details within this article have been provided by Claire Andrews (Michaels Mother) and shared with our community.